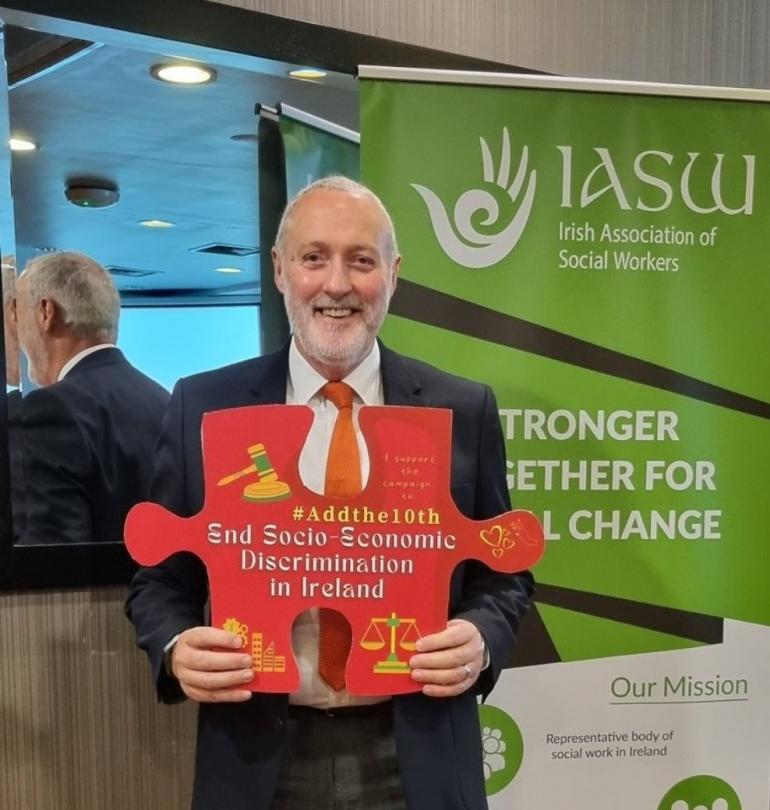 On 21st October ATD community activists presented at a conference organised by the Irish Association of Social Workers.  The theme of the conference was ‘Accelerating inequalities, impossible choices: Exploring anti- poverty practice in social work’. This conference provided space for discussion on how those working within social work can better address the needs of those experiencing poverty, and the need for more inclusive methods when working with those experiencing poverty.  “The conference is an opportunity for the profession to take a pause to consider how best to respond to the inequality we witness every day, to speak up for social justice, and to identify and demand the resources to make that change happen”.  We were delighted to be given the opportunity to address those working in the social work profession alongside academics, analysts and practitioners.  We used our time to present our poverty aware practice, share personal testimonies and show our new poverty aware practice film as delivered in Trinity College.  This article will give an outline of the conference, the important learnings shared and the value of the community activists being invited to an event such as this. 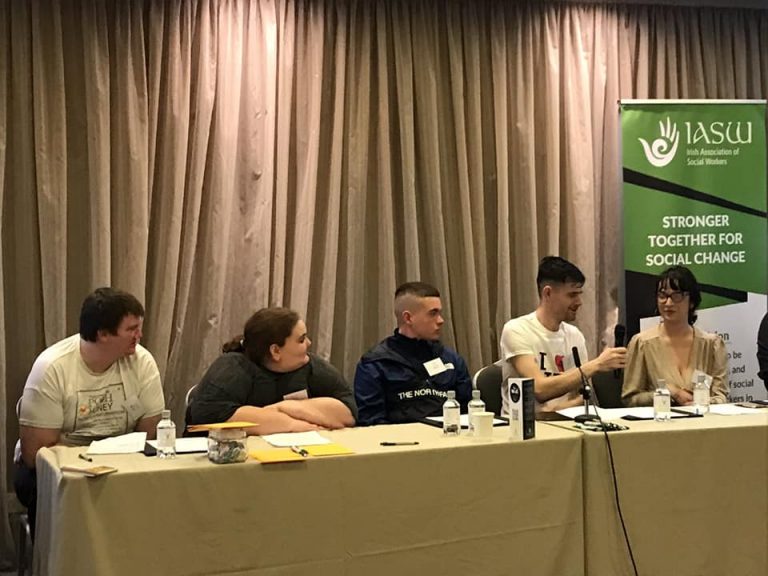 ATD Ireland kicked off the day with Jimmy, Christina, Andrew and Kye. The presentation began with a question addressed to the audience, ‘What does socio-economic discrimination mean to you?’. This allowed for interactions between the audience and the panel. The social workers answered this question by referring to their own experiences in the field. Next, the activists spoke about their own encounters and hardships in the social work system. Christina and Kye both gave accounts of the care system. “No child that’s in care has asked to be there”. Christina offered her insight into how homeless accommodation is discriminatory towards couples as there are no couple rooms.  Jimmy shared a poem he had recently written based on his experiences in the homeless services and through living in poverty.  “So let’s fight for justice, So let’s fight for life in the homeless services“.  Andrew first spoke on Lorraine’s behalf and her circumstances with social workers. For example, as a new mother, a social worker came into the hospital room. This left a huge impact on her and she suffered from nightmares about her baby being taken away from her. He then spoke about himself. He also mentioned his recent trip to the UN which was met with a huge round of applause. The presentation finished with a discussion of the Poverty Aware Module and the Addthe10th campaign.

Although ATD were the only group with a presentation led by those with a lived experience, the conference showed that there is a growing recognition of the importance for those with a lived experience to be at the heart of these discussions about policy and practice.  It was welcome to see quotes and real- life stories from service users and those experiencing poverty fuelling the work presented by the other speakers

Many of the themes outlined by the community activists were also echoed by the other speakers, such as the deficiencies in homeless accommodation and negative experiences within healthcare.  We also appreciated many of the speakers referencing our presentation and seeing the links between the issues raised.  Dr Michael Drew shared his research on food poverty in Ireland.  “Food poverty exists when the ability to afford an adequate quality and quantity of food is limited or uncertain and when acquiring it in socially acceptable ways is a problem.  It has effects on social participation and psychological impact on those who experience it”.

“I’m a coeliac and it’s so expensive to buy food, so that sometimes I actually just eat ordinary food and I would be really ill”.

We then had a presentation from a team working in inclusion healthcare and medical social work.   They spoke about the need for a more person- centred approach to healthcare, particularly when working with those from marginalised backgrounds such as migrants, the Traveller community or those experiencing homelessness.  It was powerful to hear the reframing of those being ‘hard to reach’ to ‘easy to ignore’.

Dr Joe Whelan, who wrote the forward to our new toolkit to conducting participatory research, spoke in depth about the necessity of recognising lived experience as a form of expert knowledge.  He also spoke of the need to revert social work back to a site of activism and change “I have argued that we need to move social work firmly back towards the political.  In doing so we should revisit ‘ideas lying around’ and begin to reclaim our rich radical roots”.

Paul from EAPN Ireland discusses the structural causes and the extent and impact of poverty in Ireland.  Further, he draws attention to the individual and societal damages brought about by inequality. “200,400 people are living in consistent poverty”.  Andy McClenaghan from the British Association of Social Work in Northern Ireland shares learnings from working in partnership within the #crushedbycol campaign and the principles of social activism. 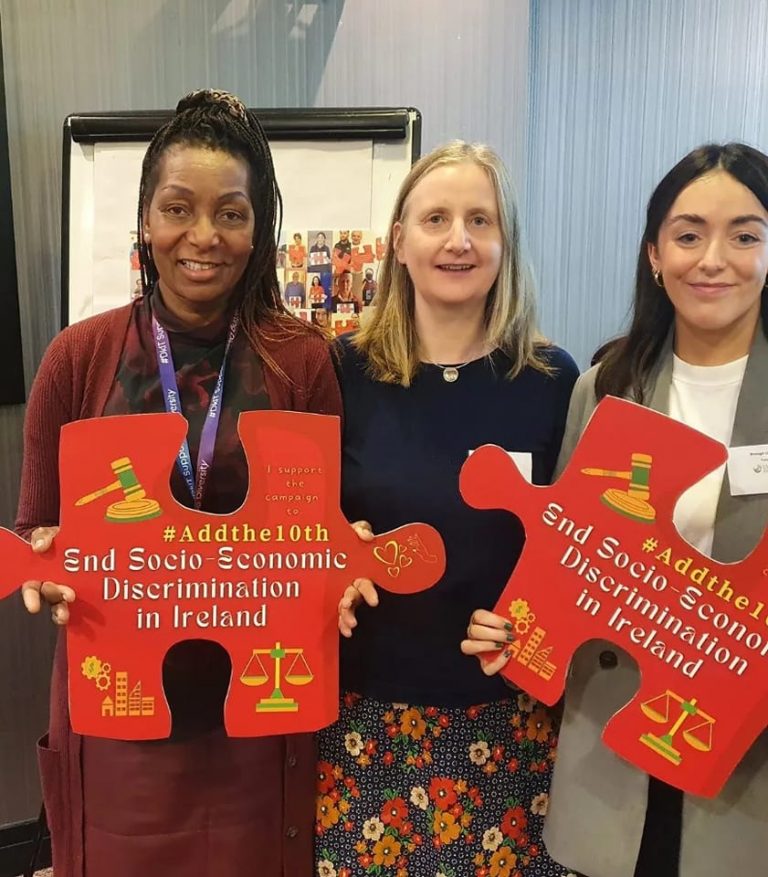 ATD was delighted to be asked to speak at IASW conference. It provided a space to speak on issues such as socio-economic discrimination and some failings of the social work system. We, as a group, felt listened to and respected. Not only was it a great opportunity for ATD, the social workers seemed very grateful for the activists giving their time to speak. Many people came up to them after their speeches, thanking them and giving their own opinion. Some of these conversations included acknowledgement of how hard it must be for Jimmy and Christina to be a married couple in their accommodation. There was emphasis placed on how brave the activists were to speak up about some of the hardships they endured. The combined importance of the activists being given this opportunity and the social workers eagerly listening, highlights even more how the two groups are fighting the same system. We also promoted the Addthe10th campaign which encouraged the audience to get involved and take some pictures with the jigsaw.

This event was important in identifying poverty as a root cause for many of the social issues social workers encounter through their work.  Poverty can play a significant role in the presence of other issues such as poor mental and physical health, homelessness or addiction.  Recognising this will ensure that there is a better understanding between social workers and their clients.  It will enable social workers to have a more empathetic and non- judgemental approach.   Further, addressing poverty as a root cause will offer a path towards creating more effective and long-term solutions.

Another takeaway from the event was how the management line focuses on the efficiency of the social workers, rather than the quality and provision of care. Two social workers discussed their experiences of how their managers place a huge emphasis on the number of case files they have and how quickly they can get through them, rather than going with a human-centred approach. Again, this works on both sides, with the social workers wishing for more personal one-on-one care for their client and the people receiving that care, longing not to just be another name on a list. It is necessary to promote respect and dignity in the care system and erdicate some stereotypes and judgements that people often face.

The event was a great opportunity for activists to be heard and to bring the human experience to light. It was pivotal for social workers to gain some different perspectives to bring to their own careers. It was also interesting to gain some insight into some barriers the social workers face. ATD are very grateful to be invited and would like to thank the activists for sharing their stories and IASW for the warm welcome and opportunity.