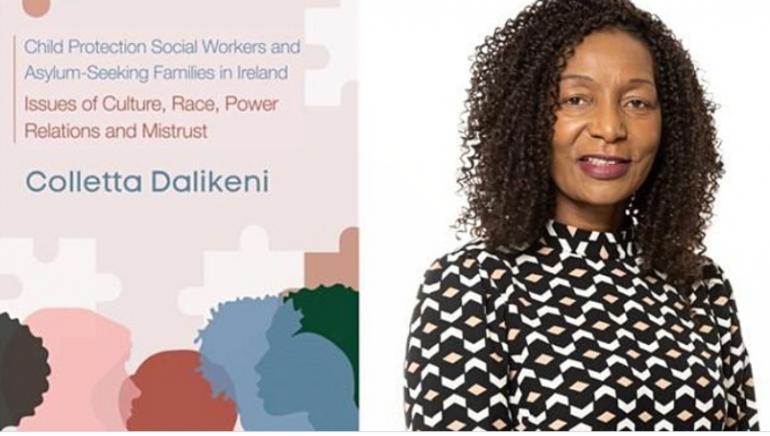 It is timely, I believe, not only for social care professionals but for all those working with migrants, refugees and asylum seekers. When I set out to write this book, little did I imagine that more than 5 million people would have fled Ukraine in less than two months, putting the plight of refugees firmly in the spotlight.

Originally from Zimbabwe, I first came to Ireland in the late 1980s to work as a volunteer with the L’Arche Community for people with intellectual disabilities, having met the organisation’s founder, Jean Vanier, when he visited my native country. Back then, I also got the opportunity to study social work at University College Cork. A few years later I returned to Zimbabwe to establish the L’Arche Community there, becoming the organisation’s founding director in my home country.

When I finally returned to Ireland to settle here in 2001, I worked in the area of child protection for the NEHB (now the HSE) as a social worker and later as a social care lecturer at Dundalk Institute of Technology. While I was working for the NEHB, exploring the interaction and intervention experiences of child protection social workers with asylum-seeking families living in Direct Provision, I had already started work on my PhD.

My concern about service providers’ response to those then seeking sanctuary was prompted by my experience of seeing young people crossing the Border and gardaí accompanying them to the social work office for age assessment and assessment of need. I recall other social workers asking me what age I thought the young people were. There appeared to be an assumption that, because of my ethnicity, I would know the age of the young people who were of African origin.

My book, which was born out of my doctoral studies, foregrounds through narratives the voices of asylum-seeking families and their social workers – highlighting the many difficult experiences that arose. Among a host of themes which emerged from the study that informs the book are key ones of race, culture, power relations and mutual mistrust.

The narratives reveal much of the very hard suffering experienced by asylum seekers living in Direct Provision – described as “being like a bird trapped in a cage” and “being in prison”. Having used findings from my research in my current lecturing with both social work and social care students and in the training of those working with asylum seekers, I sought to highlight in my book how things had not changed for those living in Direct Provision and what service providers need to do to advocate for change within this dehumanising system.

At the launch of my book, I applauded the Irish Government for its swift and humanitarian response to the Ukrainian refugee crisis, whichhas shown what Ireland is capable of doing with the right political will-power. We have seen a very dignified welcome afforded to Ukrainians seeking sanctuary here. However, as a social worker concerned with issues of social justice, human rights and equitable provision of services for all, I caution that there is a very significant difference in the manner in which Ukrainian refugees are being processed and accommodated compared with the treatment of asylum seekers who are entrapped in Direct Provision for many years.

While acknowledging the immediacy of the support for Ukrainians, having spoken to refugees from Afghanistan, Somalia, Syria and other parts of the world who have also fled war and violence and are now living in Direct Provision, I am aware of the detrimental effects that living in Direct Provision, along with lengthy periods of waiting for a decision on their asylum application, has on their mental health and overall well-being.

The situation in Direct Provision and emergency accommodation is concerning, especially in relation to child welfare and protection issues and the ability of parents to parent in such situations. These concerns have been persistently highlighted over the 22 years of the direct provision system’s existence.

The media coverage given to the Ukrainian refugee crisis has raised awareness of the situation faced by those living in Direct Provision. It is shining a light on an existing issue that has not been dealt with – an issue that has been badly managed, as illustrated in this book. While the Government has stated that Direct Provision will end by 2024 it is difficult to see how this is possible since we have the Ukrainian refugee crisis.

To be realistic, this in some way is bound to stall any hopes for a positive replacement of Direct Provision. It is also fair to add that it is unlikely that Direct Provision will ever end quickly. Direct Provision has become a lucrative business, not just making money for the owners of the centres, but also providing employment for some people. At the very least, the Government should try and make it equal for everyone, especially for children in Direct Provision.

History has, time and time again, highlighted how the mistakes we make in terms of differential treatment of people, come to affect us. For example, we have seen how mistakes made in the Magdalene Laundries and in Industrial Schools continue to haunt us. Children who are being born in Direct Provision are silent today. They have no voice to defend themselves but one day they will speak in the same way as those who grew up in industrial schools are now speaking.

Finally, at my book launch, I called upon service providers to be a unified voice that advocates for equitable services for all. This is important if the Government is to attain the goals set out in its Roadmap for Social Inclusion 2020-2025.