Social worker too busy caring for others to flee Ukraine war 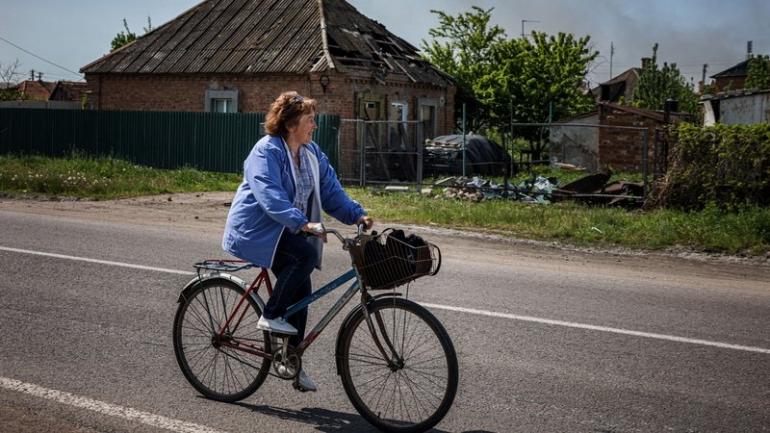 Shelling thundered from several directions and black smoke drifted upward in the distance as Zhanna Protsenko pedalled off for a house call in a war-hit Ukrainian town.

She's a social worker who has chosen to stay on the job even as the strikes have come ever closer, in large part because she is tasked with looking after people who won't - or simply can't - evacuate.

That means she is staying too, for now, and is visiting them in their homes.

"How can I leave them here?" the 56-year-old asked, standing near a hospital that was hit by a strike in the past week.

"We work. We have no time to hide," she said as contractors repaired rows of the hospital's blown-out windows and an oil drum-sized hole blasted in its brick facade.

She works in the southeastern town of Orikhiv which is still in government hands but dangerously close to the line between Ukrainian and Russian forces.

At least three people have been killed by explosive strikes in the past 10 days, authorities said.

The fighting in the area is mostly done by artillery, missiles or other deadly projectiles fired from potentially kilometres away, and which kill indiscriminately.

Homes hit by enemy fire stand next door to undamaged houses in a town surrounded by farmland, while a fire ignited by shelling has been burning for days in several long brick buildings that stored tonnes of harvested sunflower seeds.

With the blaze's smoke in the sky above her, Ms Protsenko pedalled a beaten-up blue bicycle to a small house with a neat row of tulips in the black dirt of the garden.

The woman who lives there, 65-year-old Nyna Provontsova, moved slowly on a set of wooden crutches and sank to a seat on a wooden bench outside.

"I will not survive without someone's help, I need to be taken care of every day," Ms Provontsova said, reeling off a list of medical problems.

"Sometimes I call her when I need something, to wash my legs - I can't do it myself. I can't lean forward, my hip joints were replaced."

The social worker jotted down a list of items Ms Provontsova asked her to buy, and will also go to pick up her pension.

Though the woman has two daughters, they're both in Kyiv and struggling to find work and take care of themselves as the war disrupts every aspect of life.

The war is never far away, and feels like it's getting closer.

The house across road, no more than 15 metres away, was hit by a strike and looks like it's now abandoned.

"It's one shell after another. When it hit the neighbours, I was almost knocked out of bed by the impact," said Ms Provontsova.

If the woman evacuates, which she may be forced to do, she'll have to leave behind the special mobility aids in her bathroom and on her bed that help her.

"I don't want to go anywhere," she said.

As she spoke, the social worker was listening, her hands clasped in front of her.

"You asked why we don't leave?" Ms Protsenko said. "This is why."