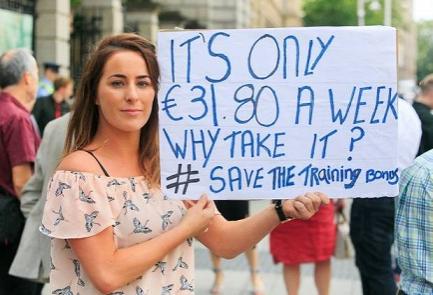 The Irish Association of Social Workers (IASW), is the professional body representing social workers in the Republic of Ireland. There are over 4,000 registered social workers in Ireland. This includes staff working in the Health & Social Care sector, in education and training, in the voluntary sector and a number of independent practitioners.

What is the issue?

The Association is very disappointed and concerned at the decision by the Government to abolish the Rehabilitative Training Allowance (RTA) from September 1st, for people with disabilities who are applying to do a rehabilitative training programme this year. This means they will not get €31.80 a week while they are on the programme.

Why does it exist

Social Workers across multiple care settings know the value of the Rehabilitative Training Allowance because we have seen the difference it makes to many people with disabilities who are engaged in rehabilitative programmes across the country. Social workers join representative organisations providing disability services in calling for the reversal of the planned cut to the RTA.

The Rehabilitative Training Allowance is not a universal allowance. Minister Finian McGrath previously stated that 2,300 people are in receipt of the RTA* . This means the HSE are spending €3.6m on the allowance every year. Minister McGrath has also previously stated that 400 new people would lose out on accessing this allowance this year*. This means the HSE will save about €220,000 this year. That’s not a lot, considering the size of the yearly HSE budget. Social workers believe that this relatively minor saving to the health service will have a disproportionately negative impact on people’s lives and unfairly targets people with disabilities.

Equitable access to rehabilitative programmes is about human rights. It’s about ensuring people with disabilities are afforded their rights to engage in society like any other citizen. This allowance supports people to be independent, to make choices and to be full members of the community. This is what people with disabilities have a right to, and deserve. The Irish government has signed the United Nations Convention on Human Rights for Persons with Disabilities (UNCRPD) which indicates a state-wide policy to empower people with disabilities to live independent lives. This decision goes against that policy.  It makes no sense. It saves very little money. It deprives people with a disability of the opportunity to be independent and live the life they want. It targets a group of people who are already marginalised and disenfranchised. People deserve better than this.

Social workers know from being told by those directly affected, that people getting the RTA allowance really need it. It’s very important to the people receiving it. It can make the difference between doing the programme and not doing it. Through our daily work social workers can see rehabilitative programmes are achieving in terms of supporting people’s access to meaningful training and education, improved quality of life, better recovery and health related outcomes, stronger social capital and social cohesion and a higher likelihood of employment opportunities. We are strongly of the opinion that abolishing this allowance is a short-sighted decision which will have long-standing repercussions for people with disabilities in our communities.